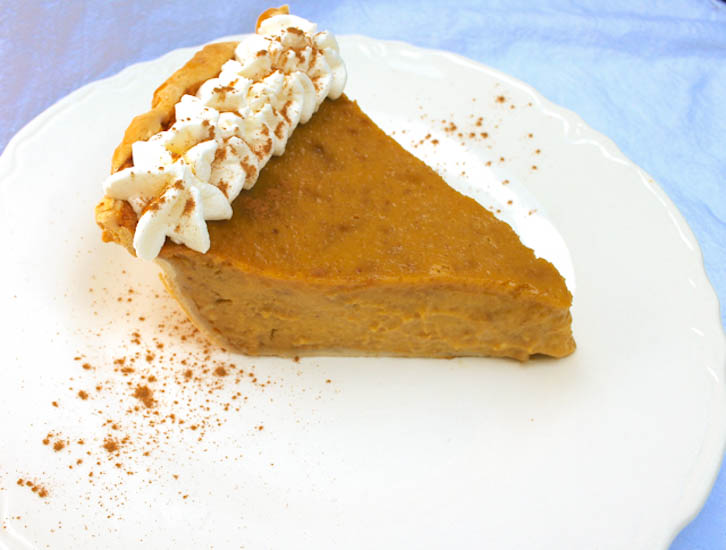 Jump to Recipe Print Recipe
Infused with fresh ginger, ground cloves and cinnamon, a freshly baked Blue Hubbard Squash Pie will open the doors for a beautiful beginning to Autumn. Top with freshly whipped cream and delight your dessert fans with a Heavenly, creamy treat.

Traditional Autumn pies are coming into season but they’re not just apples and pumpkin. Big colorful and funky shaped squash like the Blue Hubbard make terrific decorations on your front porch but did you know they also make delightful desserts?

I never gave much thought to those weird looking squash you see around farmer’s markets until a recent visit to Kinman Farms. Faye, one of the friendly staff members there told me that some squash make a better pie than pumpkin. That peaked my interest, so I bought a couple of the Blue Hubbards and decided to give it a go.

Blue hubbard squash isn’t something new but it’s also not in the main stream of dessert pie recipes. For me, the best place to turn for hard to find recipe instructions is in old cookbooks like Fannie Farmer

According to recipes I found, you can cut just about any squash in half, scoop out the seeds and lay it flat to bake in your oven. Or, you can simply bake them whole. (See specific directions for baking a Blue Hubbard Squash in the recipe printout below) Blue Hubbard Squashes are not as easy to cut into as a pumpkin, so I would suggest that if you’re not planning on saving the seeds to bake for a snack, look for a smaller one when you’re shopping around, as most places that offer them have various sizes to choose from.

Though, I will say if you’ve got a really good, sharp knife and you’re up for the challenge, go ahead and cut your squash open. The fresh aroma that wafts out of a Blue Hubbard Squash is surprisingly pleasant and totally worth experiencing. I mean, if you could wrap the end of summer, melons and falling leaves into one scent, that might come close to describing its mesmerizing aroma. 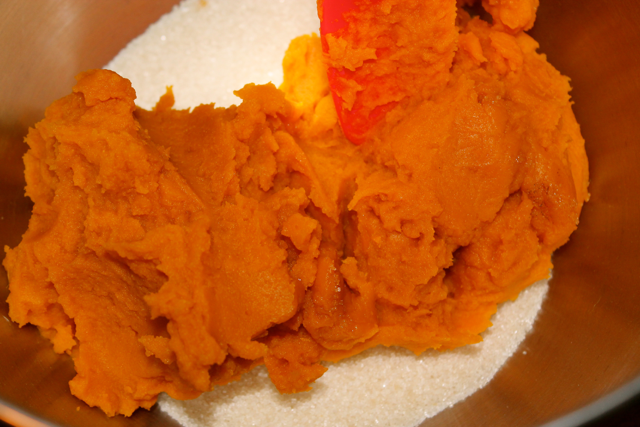 After you bake your squash and allow it to cool, the skin is very easy to peel off. You can also use a spoon to scoop the cooked squash from its shell, which ever works best for you. Either way, after you separate the “meat” from the skin/shell, you’ll need to puree it in a food processor to get it ready for your pie mixture. After you have pureed the flesh, go ahead and combine the other ingredients for your filling. As an alternative, (if you have more than you anticipated on or you want to do this as a “make-ahead” step) you can freeze the pureed squash to save for later. *See notes in printout for additional details.

The terrific thing about using Blue Hubbard Squash in place of pumpkin for pies is the fact that it has a denser quality. That makes it less likely to give you a big ugly crack in the middle. It also makes for a smoother pie. Hence the Heavenly creaminess of each bite.

When you’re in your Autumn pie making frenzy this year, I hope you’ll give blue hubbard a try. I’m betting you and your crew will be thrilled.

Have a terrific day and as always, keep it delicious!

If your squash is small enough, you can bake it whole instead of cutting it. Just be sure to poke a few slits into it with a knife, as best you can to allow steam ventilation and lightly cover it with foil as a precaution. This will prevent splatter, as a whole squash can break open with a pop during baking and explode in your oven. (not fun to clean up) You can freeze the cooled squash puree for use at a later date. Allow it to thaw and come to room temp. May need straining if there is excess water.
Keyword pie, pumpkin, squash