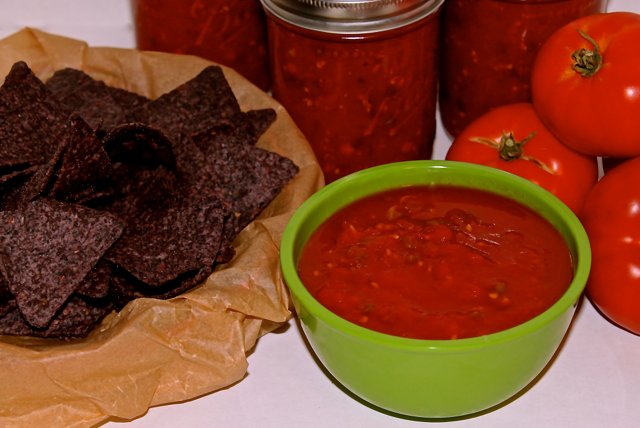 Capturing that sweet signature of Summer, between her first crisp moon in June and the fiery blaze of September is as easy as this Basic Salsa, Canning and Preserving tutorial. Tomatoes are the perfect fruit/veggie to get you started in canning and preserving. 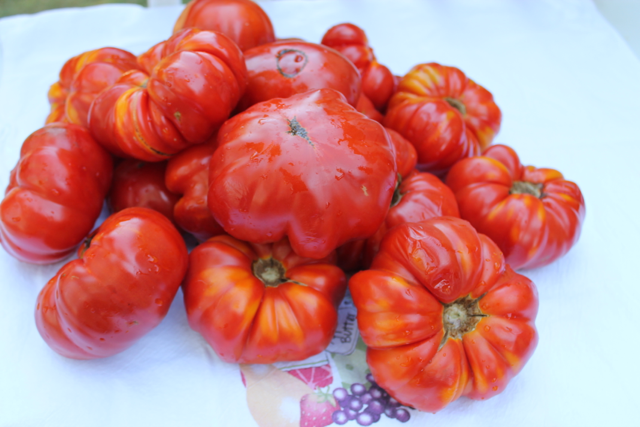 I caught one of my favorite farmers at the market on the last day they were planning to be there and bought a bunch of heirloom tomatoes just for making this recipe and I’m so glad I did because they’re perfect for salsa. I also bought a bunch of Roma tomatoes for a tomato soup I’d been hankerin’ for.

With any kind of tomato, when you’re making something like salsa you’ve got to peel the skin off and the easiest way to do that without wasting the precious goods inside is to give them a quick blanch in boiling water. 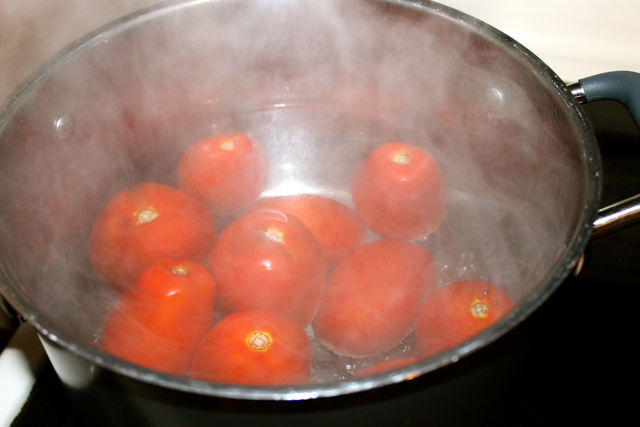 After about 2 minutes, depending on the size of your tomato, the skin will crack. 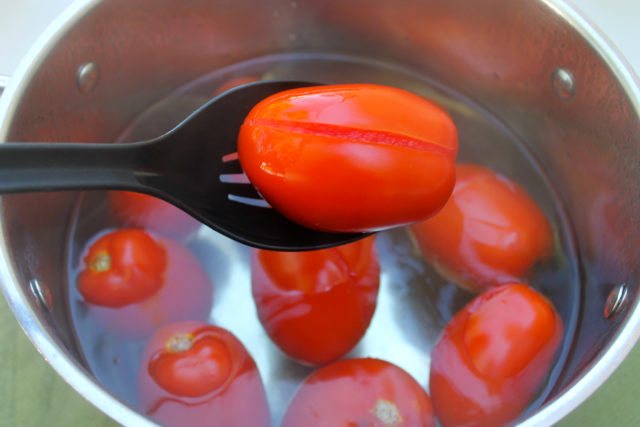 After that happens, you’ll take them out of the hot water and peel them. I like to dip the tomatoes into an ice bath after blanching them so that they’re cool enough to handle right away. 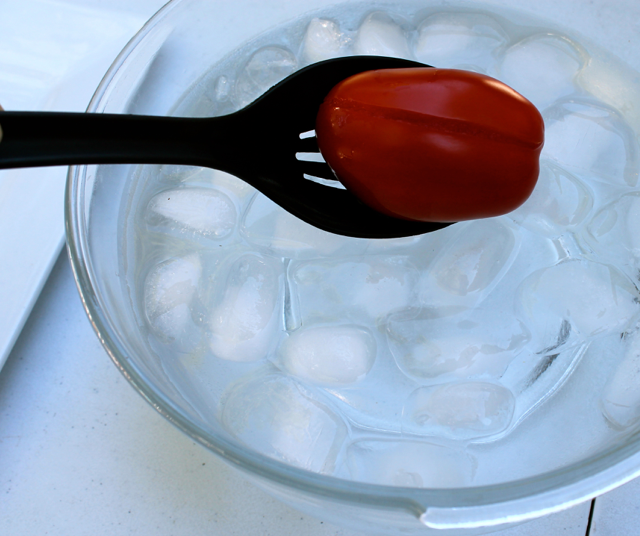 You’ll find that the skins will slip off of the tomatoes in one or two swipes after you take the core out of the middle. 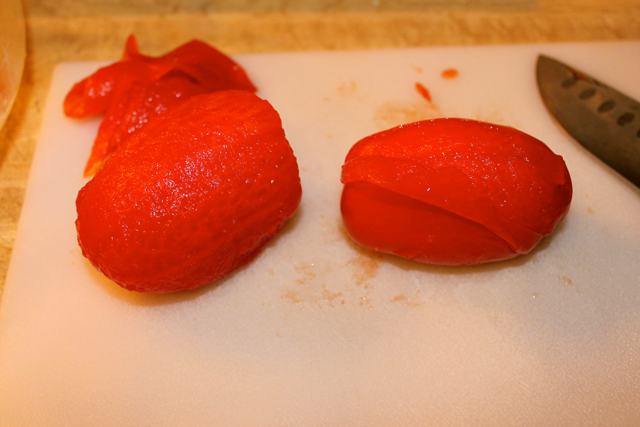 For this batch of salsa, I used up a bunch of peppers from my own garden, a large onion and some garlic. 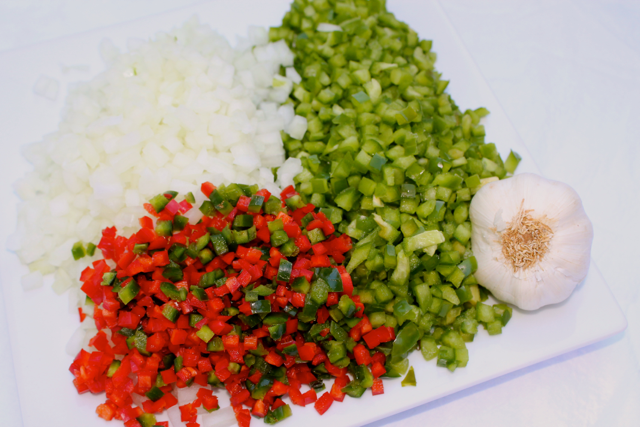 All those delicious veggies go in a large pot on the stove with a few seasonings to simmer for about forty-five minutes. 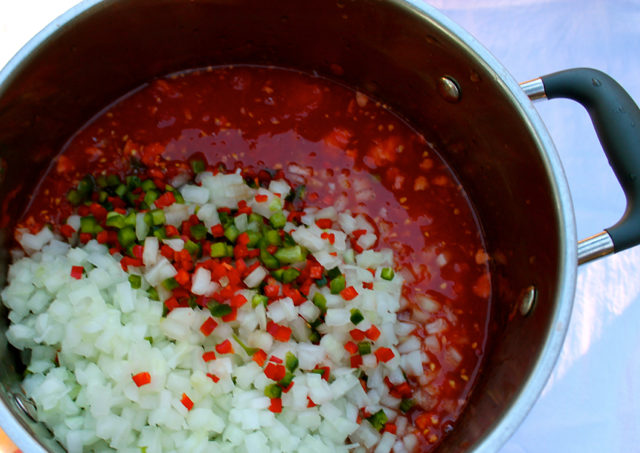 While the salsa is cooking, you’ll prepare your jars, lids and bands by washing them in warm soapy water. Be sure to inspect the jars and lids to make sure they are in tact with no chips in the glass rims or warping on the lids.

The lids, you’ll only use one time for canning because of the sealing compound that’s on them. That sealing compound forms to the jars when you heat and process them. After one use, they could be insecure if you try to heat and process them again. Some people do reuse them but I don’t like taking a chance on losing all my hard work because of a used lid not sealing. You can purchase just the lids for a couple of bucks.

Have a large pot of boiling hot water to heat the jars up with before filling them and a small pot of water for heating the lids so that they’ll seal well. You can wash the jars in the dishwasher and keep them in there until you’re ready to fill them if you prefer. The heat from the dishwasher is okay, too. The whole purpose of heating the jars is to maintain temperature. You don’t want to put flaming hot liquid into cold jars because you’ll risk busting them. Not a good thing.

Preparing the jars for canning is the same method whether you’re doing a water bath or pressure cooking them. 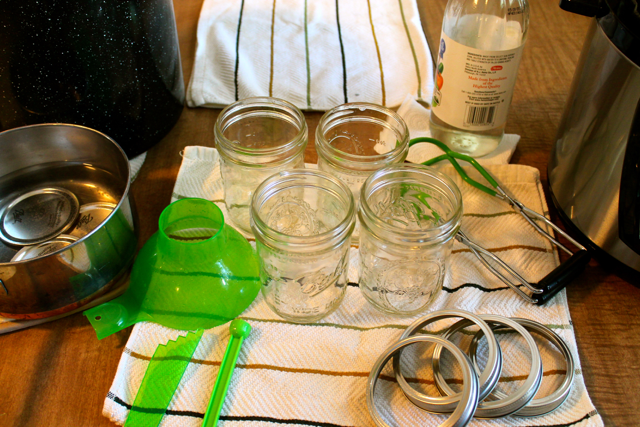 simply because there’s lots of safety guidelines and more information than I couldn’t possibly fit into a food blog post without making it impossibly long.

The goal here is not only to have some great salsa but to make sure it’s safe to eat after you’ve canned and processed it. With tomatoes or any higher acidic food, you can do the canning in either the pressure cooker or the water bath. With lower acidic foods such as green beans and chicken stock, you’ve got to use the pressure cooker to ensure proper temperature and pressure is applied in order to kill bacteria, yeasts and molds. The acid in foods like tomatoes helps with food safety and doesn’t require as much heat or pressure. 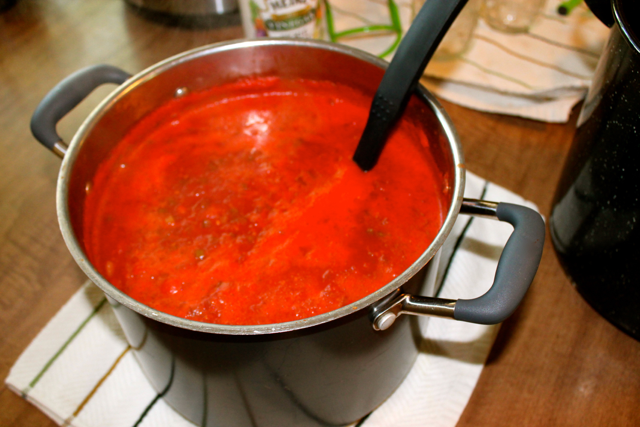 Once you’re salsa is done cooking, it’s time to fill the jars. A couple of tools that I find make the job easiest are a good fitting funnel and a wooden spoon or a measuring stick. The funnel helps you get everything in the jar without making a mess. A wooden spoon or measuring stick is needed to get the bubbles out of the jar and helps you see how much room or head space you have left in the jar after filling it. 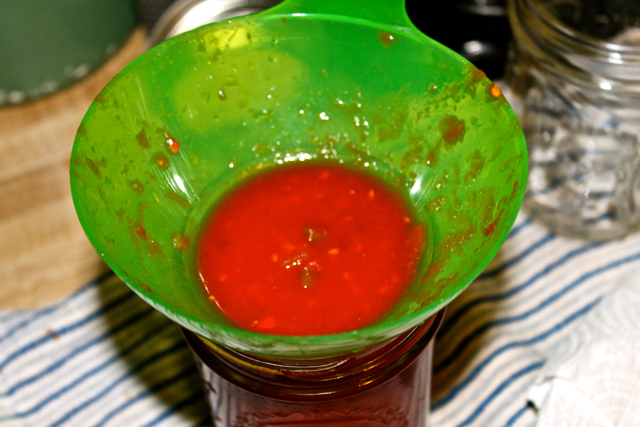 You’ll remove any air that’s trapped under the food. Make sure you’re not using anything metal to do this because you could scratch the jar or even break it. 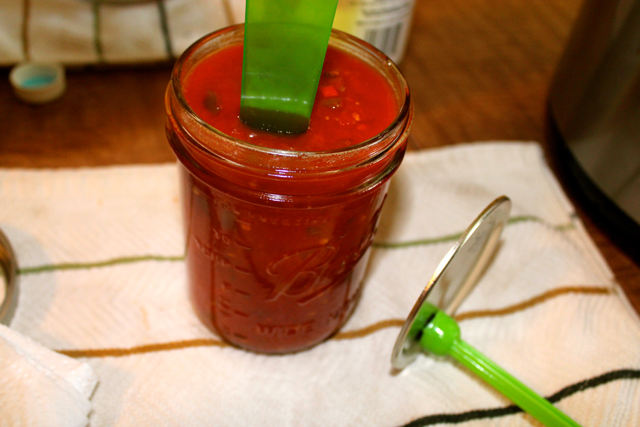 Head space is specified in canning recipes according to the acidic levels of the food you’re processing. Lower acidic foods require one inch of head space while higher acidic foods require between one half inch to one quarter inch. Again, the lower the acid in the food you’re canning, the higher heat and pressure you’ll need to use, so you’ll need more room in the jar for expansion.

For this recipe, the head space required is one quarter inch. 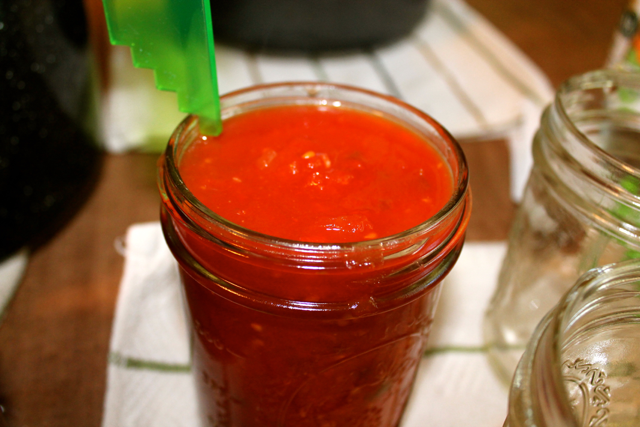 After you fill each jar, you’ll take a clean paper towel and wipe the rim with white vinegar to make sure it’s clean and the lid will be free of any obstruction that might keep it from properly sealing. 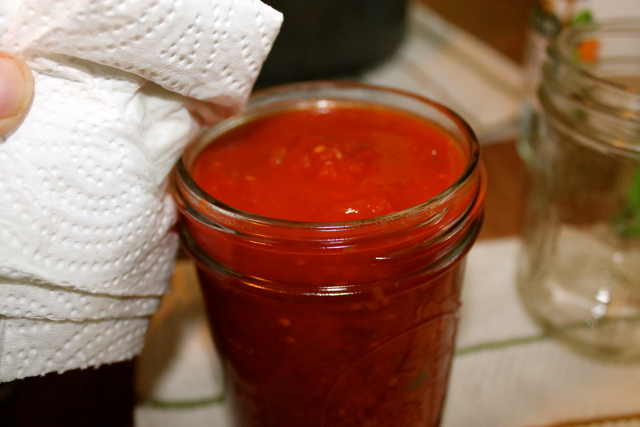 Your lids should be placed in hot water prior to putting them on the jars. This warms the compound on the underside of them and allows for a better seal.

When placing the lids on the jars, you don’t want to touch the underside of them because you could inadvertently damage the sealing compound. Ball sells these handy little magnet sticks for picking up your lids and they’re only a dollar or two. 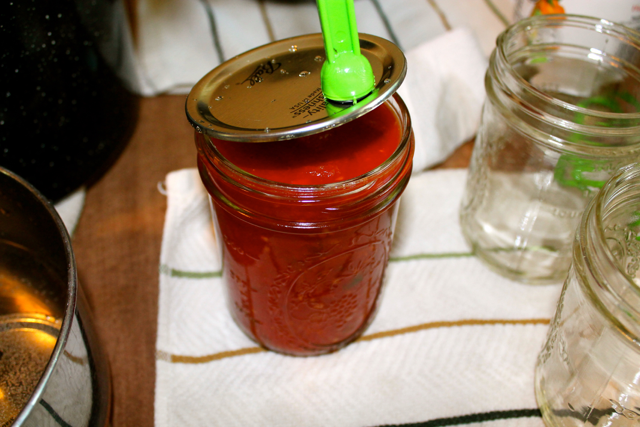 After the lids are on, you’ll screw the bands to finger tight over the jar. Don’t over tighten the bands because as you’re processing the jars and the food expands, the air within will be released. If the bands are too tight, a good seal will not be formed. 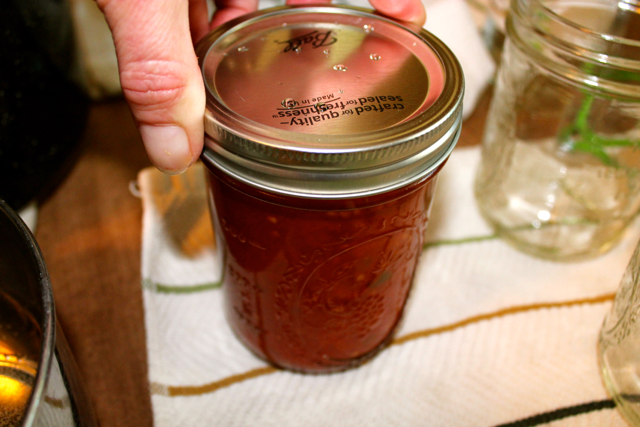 For the pressure cooking method, you’ll place the jars in the pot and fill the bottom with enough water to cover the jars one quarter of the way up.

Place the lid on the unit, turn the steam release valve to the locked position and press the canning/preserving button. Adjust the timer to 15 minutes. 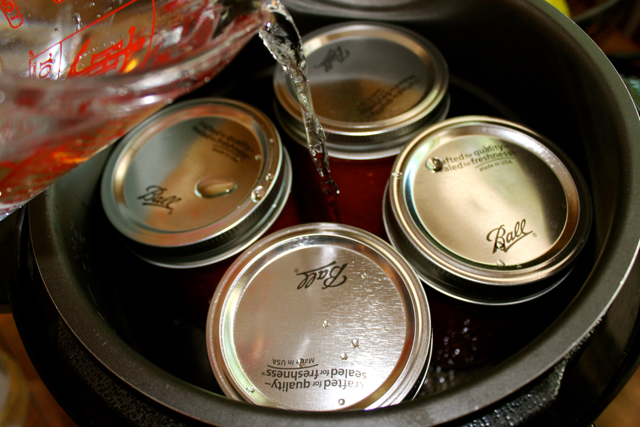 After the timer goes off, carefully release the steam and remove the lid. Allow the jars to remain in the pot for five minutes.

Using jar lifter tongs, remove the jars and set them on a dry towel in a cool, draft free place for 12 hours. 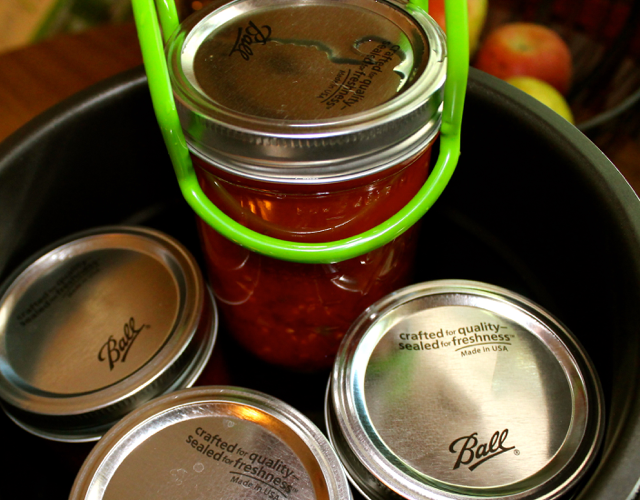 For the water bath processing method, you’ll need a large pot with a lid. Fill the pot with about two inches of water and bring to a gentle boil. Place the jars into the pot and add enough water to cover the jars by one inch. Allow the water to come to a boil again. 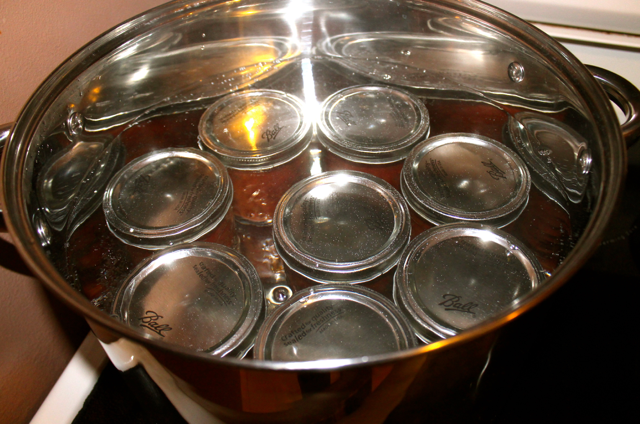 Once the water is boiling, cover with the lid and adjust the heat to keep the water boiling in a gentle roll. 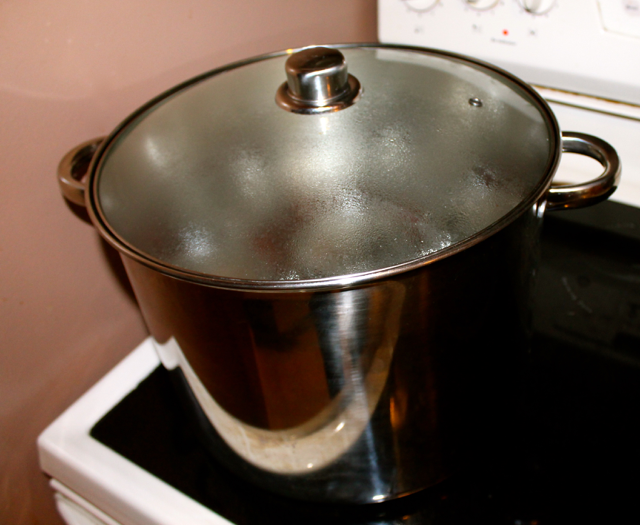 Set your timer for 15 minutes to process. Once the timer goes off, remove the lid and allow the jars to remain in the pot for five minutes before removing. 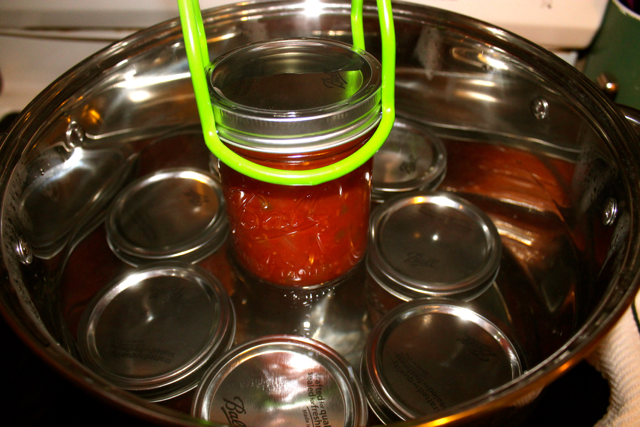 Place the jars on a clean towel in a cool draft free place for twelve hours. Do not worry about any water left on top of the jars as it will evaporate and you don’t want to disturb the seal. 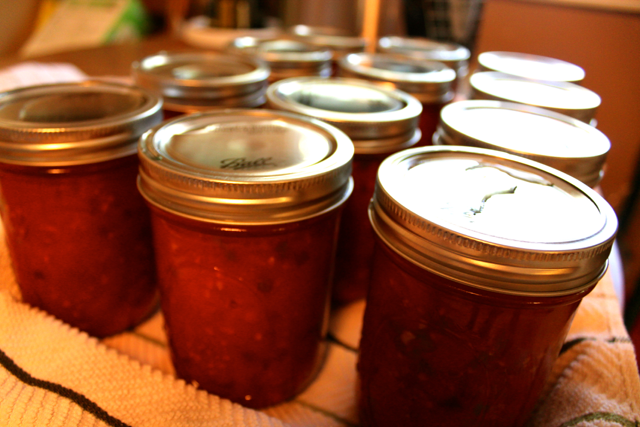 After the jars have settled and cooled, the lids should have no resistance left in them. If you press down on the lid, it won’t move. If it does move or pop, place the jar in the refrigerator because it has not sealed properly. If everything checks out okay, you’re good to go and you can store the jars in a cool dark cupboard (50 to 70 degrees F.) for up to one year. 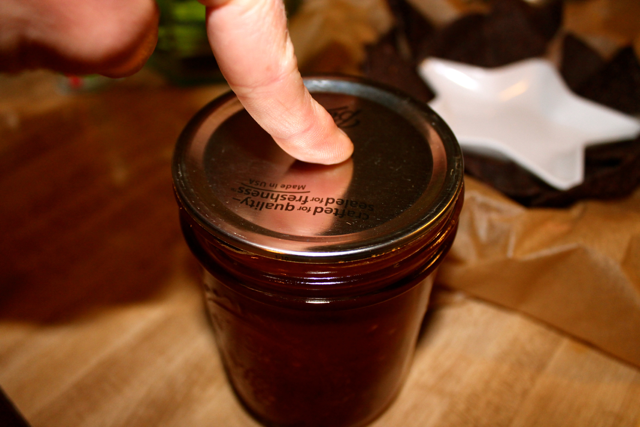 The recipe in today’s post will yield 12 pint jars of mild salsa.  If you want your salsa to be hotter, leave the seeds in your peppers when making the batch.

Football season has arrived and cooler days are settling in. Yes, Summer is over but that doesn’t mean you can’t savor it all Winter long. And you can with this delicious treat!

I do hope you’ll catch the last bit of those bodacious beauties from your favorite farmer and make you some salsa before they’re gone. Like me, you’ll thank yourself for doing so.

Have a beautiful week friends and as always, keep it delicious!

Recipe by: Connie Murray @Happybellyfoodie via of Dottie Kresser 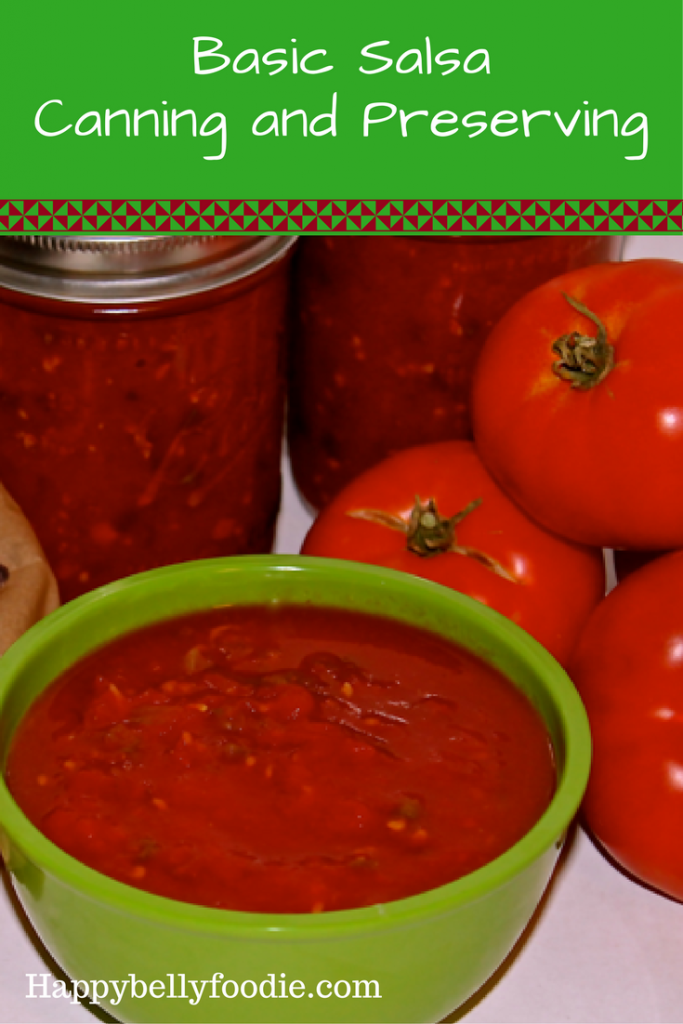