Smooth and creamy, this Pressure Cooker Butternut Squash Butter is a delightful treat for your biscuits, toast and so much more. Fresh ingredients make it naturally delicious, nutritious and tasty!

Hello everyone, Connie Murray here from the Happy Belly Foodie. I’m thrilled to bring you my latest from-scratch, pressure cooker creation. Fresh fruits and veggies are plentiful this time of year and that includes lots of beautiful squash. There are many to choose from and I figured butternut was a good place to start.

With it’s slender figure and not too hard to cut flesh, butternut squash makes a fine specimen for making a fruit butter. The seeds and stringy flesh come away easily with a spoon.

Using the pressure cooker to soften the squash and once again to infuse spices into it makes this recipe a fairly quick task. I’ve made a video to show how simple it is. Have a look.

makes it easy to lower and lift the cut squash in the pressure cooker pot. Once cooked and cooled, the skin glides off with a small paring knife

. The recipe yields a good seven and a half cups, so there will be plenty to share with friends.

To enjoy your fresh Pressure Cooker Butternut Squash Butter, slather some on a freshly baked biscuit or spread over toast. We’ve enjoyed it as a topping for vanilla ice cream! 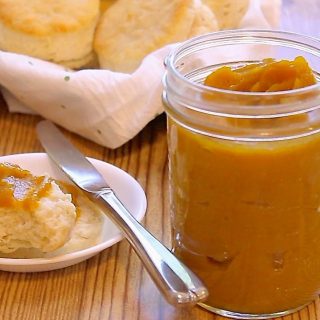