Move over fish sandwich, these crispy shrimp burgers with chipotle mayo are what we crave!

And you will, too once you’ve gotten your hands on one. They’re surprisingly scrumptious and super easy to make.

I was introduced to these crazy delicious burgers last summer. A local fish shop, Afishionados makes them fresh and sells them, ready to cook. Though I didn’t acquire the original recipe, I took my best shot at it and these are pretty darn close. The trick to getting the burgers to shape up is to grind half the shrimp in a food processor. They turn into a glue-like paste that holds on to the rest of the shrimp. To get them all crispity crunchy, they’re coated in panko breading and then fried.

To get started, you’ll need a pound and a half of peeled and deveined shrimp divided. Chop half of the shrimp roughly. The other half will go in a food processor.

You’ll add an egg, flour, panko breadcrumbs, salt, chopped green onion and a bit of cayenne pepper to the food processor with the shrimp. Have some more panko breadcrumbs on a plate, ready to coat the patties, once they’re mixed up and formed.

Add a squeeze of lemon to finish the seasoning. Pulse the mixture until the shrimp become paste like.

Coat the patties with the panko breadcrumbs on both sides. Place the burgers on a tray and set in the freezer to firm up for about 30 minutes.

Note: The shrimp burgers freeze very well for later use. That makes them a great make ahead meal.

When the burgers are firm, heat some oil in a skillet over med/high.

Once the oil is hot enough for frying, cook each burger on both sides until browned and crispy. The internal temp should be 120 degrees F.

Serve on your favorite buns with a little Chipotle mayo. (recipe included below)

Chow Time! If you’re a shrimp lover, I’m just going go ahead and say, you’re pretty much destined to fall in love with these shrimp burgers. They have the best texture inside and out. Or is that outside, in? Either way, ya gotta give ’em a try! They’re just too good to pass up. 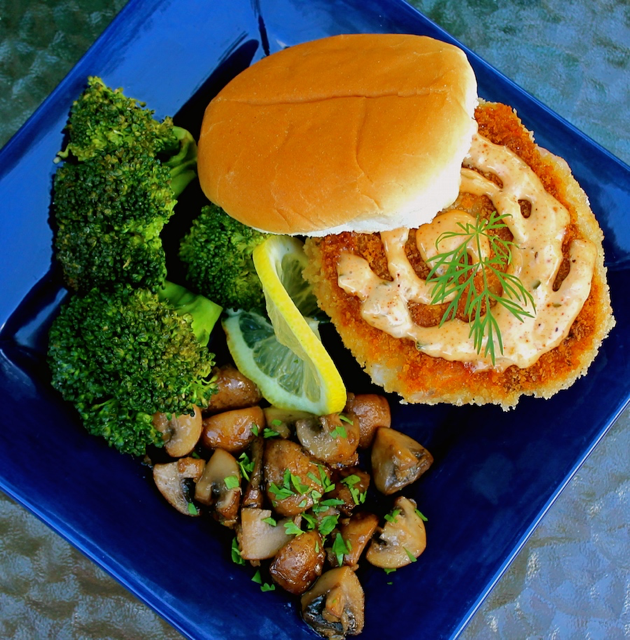