What is a meringue, anyway? If you ask me, I’ll tell you it’s pure magic. 😉

But really, meringue was invented by a pastry chef in the early 1700’s. The ingenious combination of egg whites and sugar whipped full of air make a lightly sweet, slightly creamy, melt-in-your mouth topping for pies, such as today’s feature. It is also used in desserts such as baked Alaska, macaroons, puddings and foam cakes.

Meringue is a perfect topic for the celebration of eggs because you can really see the science of them at work when you’re making it. The yolks are important for this pie as well because they give you that scrumptious custard-y, tart filling that the meringue compliments so well. 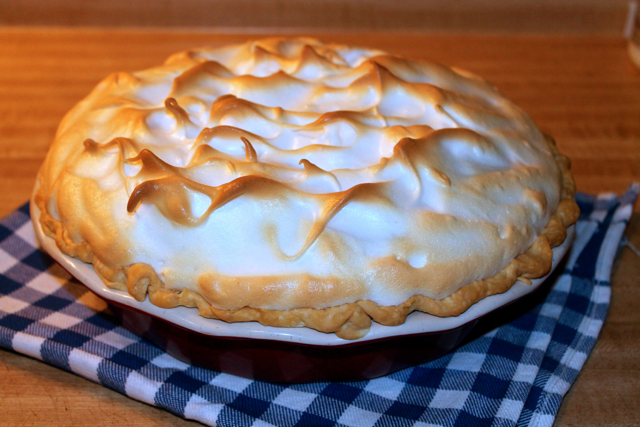 Before we get into the fantastical filling and topping of the pie, we need to take a look at the crust. You can make it from scratch or use a pre-made one. Either way, for this pie, it needs to be pre-baked before it is filled. 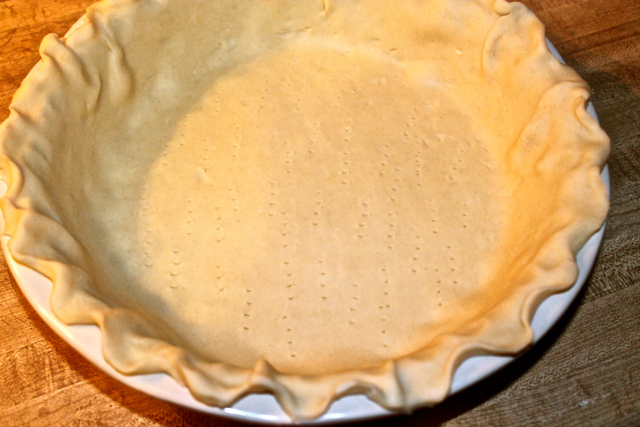 A pre-baked pie crust is cooked in a 350 degree F. oven. To keep the middle from bubbling up and becoming unevenly cooked, you’ll need to use pie weights. This is called blind baking. I don’t have pie weights, so instead I used dried beans to fill the center.

You’ll just place a piece of parchment paper or aluminum foil over the crust and fill it with the weights. 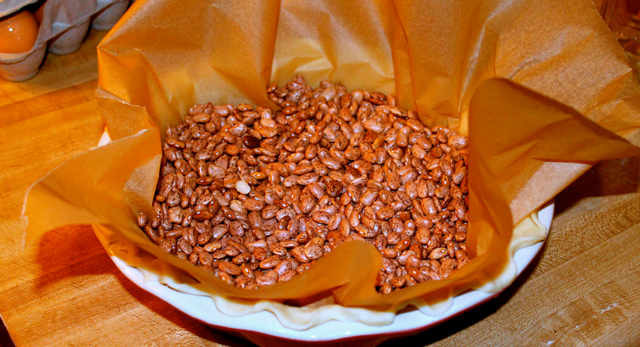 Place it in the oven for 15 minutes to bake. Take it out and remove the beans. Then place it back in the oven for another 7-8 minutes or until the edges are lightly golden brown. Set it aside to cool while you’re making the filling and meringue. 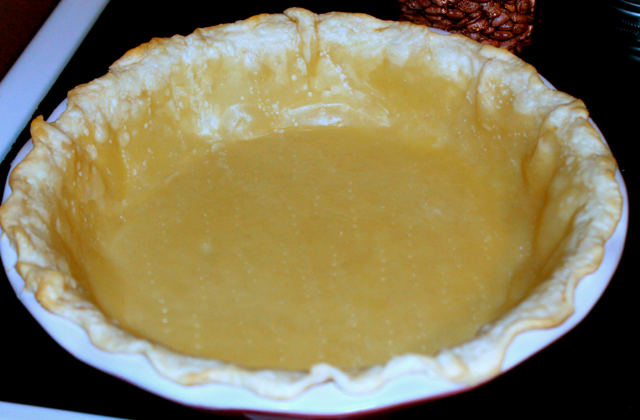 Now for the filling. I’m just going to tell you that lemon meringue pie is one of the most difficult pies to make, aesthetically. There is no fruit, other than the juice and zest of the lemon, to give it structure for holding it together.  In order for it to hold together, you’ll be using corn starch for the structure. And for that to hold up, you’ve got to cook it long enough for the bonds of the corn starch to take. Otherwise, you’ll go to cut your pie and it will be like pudding that you wind up having to scoop out with a spoon.

Not to worry, I made four different lemon meringue pies and by the last one, I finally figured it out. My crew and friends on Sunday didn’t mind graciously helping out by eating all the pies. The flavor of a from-scratch lemon pie truly is fantastic, regardless of how it looks but for the final recipe and instructions, I wanted to give you folks something that was fail proof.

So here it is. To start out, place some sugar, unflavored gelatin and the corn starch (amounts are in the print out below) in a medium sauce pan and combine well. Add water and give it a whisk. I know, I know.. gelatin is cheating but hey, we want it to be pretty. Right? By the way, no recipe I found uses the gelatin but by that fourth pie, I was willing to take a chance because the first three pies just weren’t holding up the way I wanted them to.

Let’s get started. So, you’ll turn the heat onto medium high and stir constantly once the mixture begins to heat up. Turn the heat down to medium low and keep whisking until you see it begin to boil and bubble. You really have to stay with this because if you don’t you’ll have clumps and we don’t want clumps. 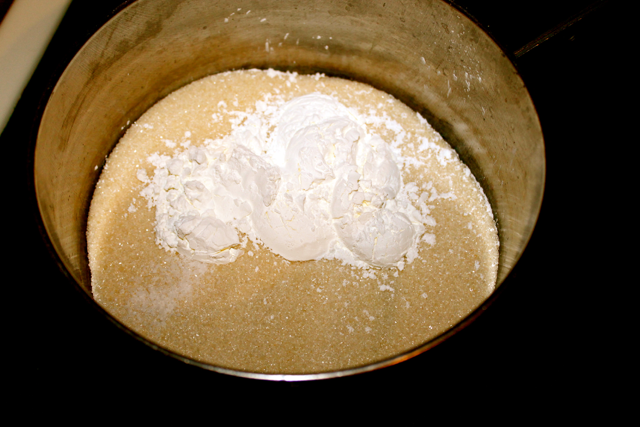 Once your sugar mixture is nice and thick, you’ll add the eggs. You’ll need to temper the eggs because the last thing you want is cooked egg bits in your lemon filling.

To do this, you’ll whisk the eggs in a separate bowl and add some of the hot sugar mixture while stirring constantly. About half of the mixture is plenty to get the eggs to the right temperature. 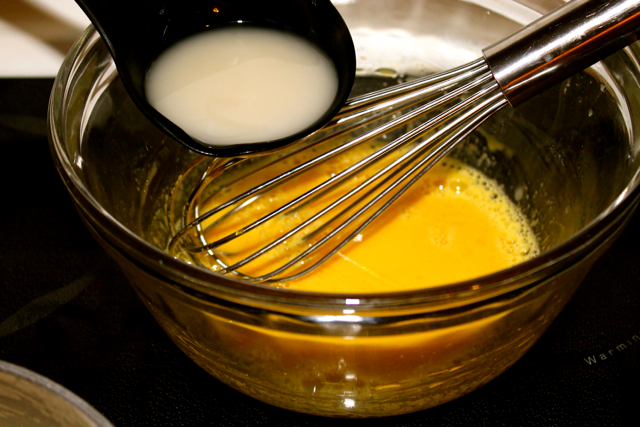 Then you can add the eggs to the pan without worry. You will bring the mixture back up to a boil and thicken it once again. Be sure to whisk constantly while it is heating up, once again because we’re avoiding clumps. 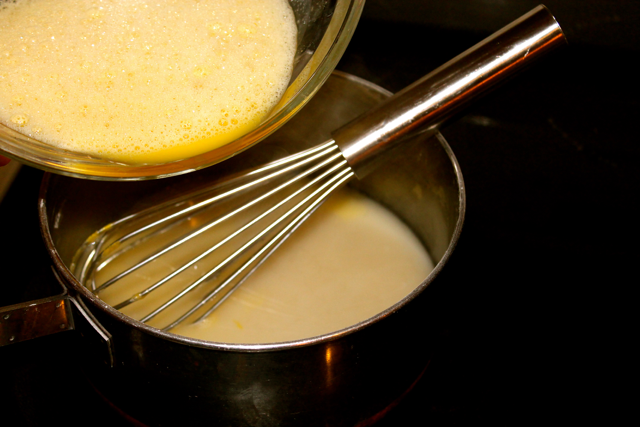 Now for some flavor. Lemon! If you’ve never zested a lemon before I’d like to suggest using the smallest part of a box grater if you have one. It just makes it easier. I used two large lemons and that was plenty to give me one tablespoon of zest and 1/2 cup of juice. Be sure to strain the juice to get out all the pulp and seeds. 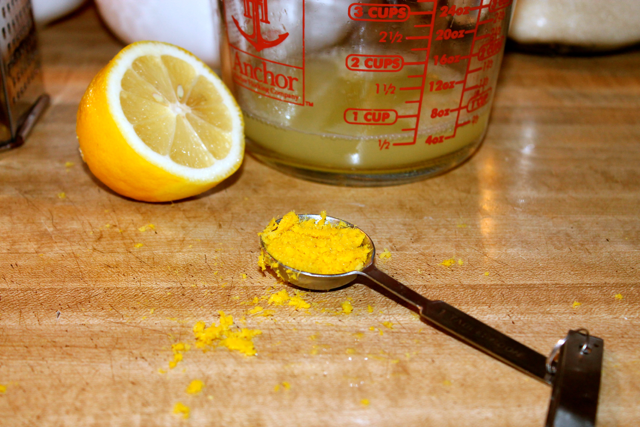 You’ll add your “curd” mixture to the lemon juice, zest and a little bit of butter. The butter gives the filling a nice richness. 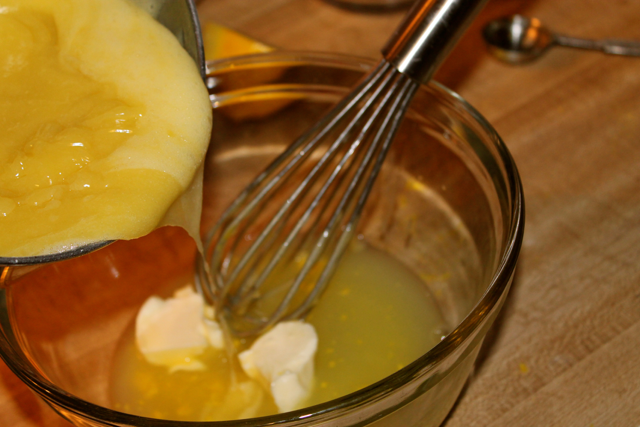 Once that’s all incorporated, cover the mixture with some plastic to keep it from forming a skin. It will still be nice and warm when you place it in the pie shell, which is what you want to keep the juices from weeping into the bottom of the crust. If your mixture becomes too cool before you get the meringue done, just place it back over the heat to warm it up some.

It’s important to have that lemon filling fairly warm for another reason, too. The meringue needs to be cooked underneath as well as on top. If it’s too cool, you’ll have a soggy meringue underneath. 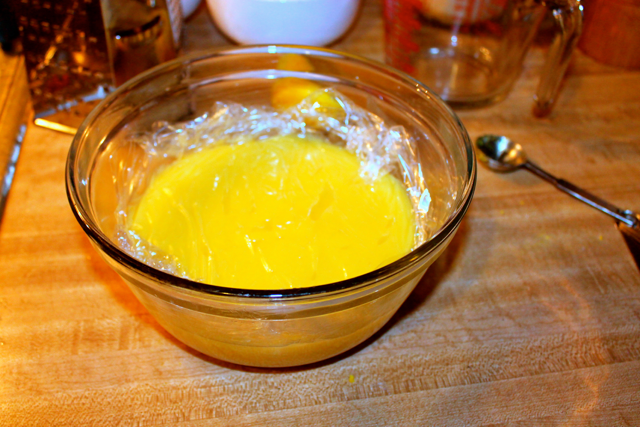 Now for the magical part. The meringue! 😉 Basically the egg whites are whipped into shape by adding lots of air. The protein bonds hold the air and make it fluffy.

I tested different ways of making the meringue (four!!) and the best method was to start out with only the egg whites in the bowl. You’ll want to make sure you’re using a very clean metal bowl for the mixing. If there are any oils or particles in the bowl they can inhibit the rising of the egg whites. If you’re not sure, just take a lemon half and rub the juice all over the bowl and then wipe it out with a paper towel. Any oils in the bowl will dissipate.

Beat the egg whites on low and then gradually increase the speed to medium. When the egg whites become foamy you’ll add a mixture of sugar, water and corn starch and cream of tartar, one tablespoon at a time while continuing to mix. Yes I said corn starch. Corn starch is added insurance for holding the meringue structure together. 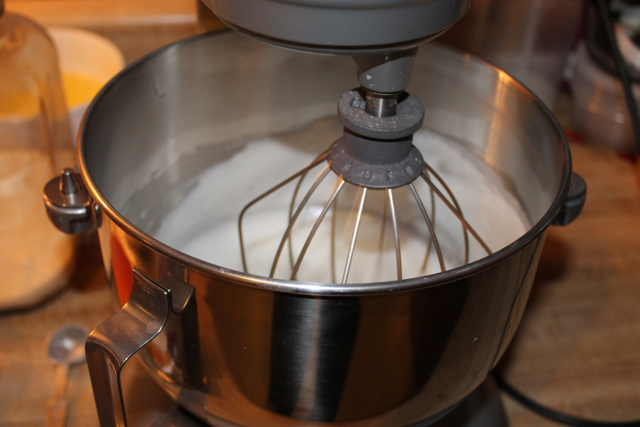 Once all of the ingredients are incorporated and the meringue is shiny and thick, it’s done. To test, you can just stick a spoon in the mixture and hold it up. If the meringue stands up and holds on it’s own in stiff peaks, you’re good to go. You don’t want to go past that point because you will have over beaten it and you’ll have cracks in the finished product. If you happen to accidentally over beat the meringue, just add another egg white and mix until you get it correct. 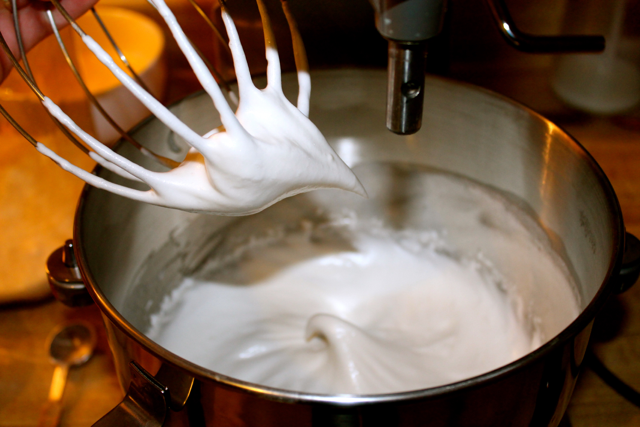 Finally, it’s time for the fun part, putting it all together. First, turn your oven to 325 degrees F. to preheat.

You’ll pour the filling into the baked pie shell and smooth it out evenly with a spatula. 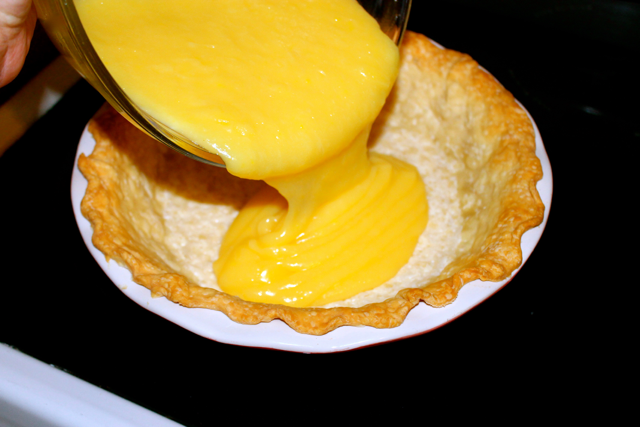 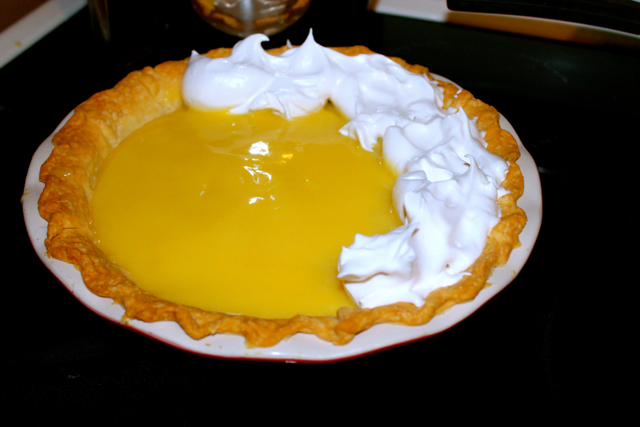 Bake your pie for twenty-five to thirty minutes or until the meringue peaks are golden brown. Allow the pie to cool for 2-3 hours before cutting into slices. I like mine chilled so I place it in the refrigerator for an additional hour or so.

The first slice is the hardest one to get out of the pie but when you have structure like this with those little tweaks I made to the recipe, you shouldn’t have any problems. 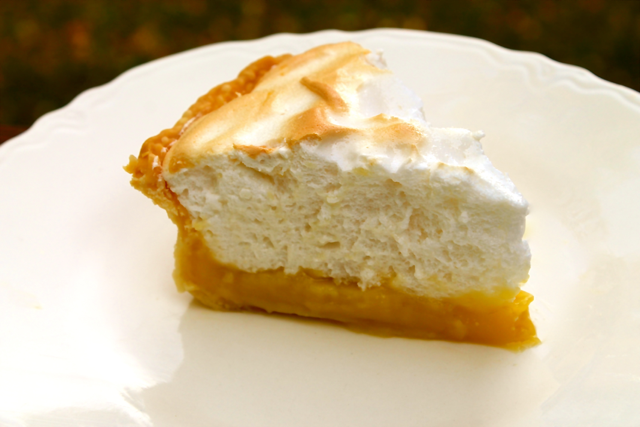 Since I like sharing flops and flubs-ups, I thought I throw those first three pie pictures out here so you might have a giggle or two.

I tried the Swiss meringue instructions by heating the egg whites over a double boiler and then placing the pie under the broiler. Well, that didn’t work out too well. 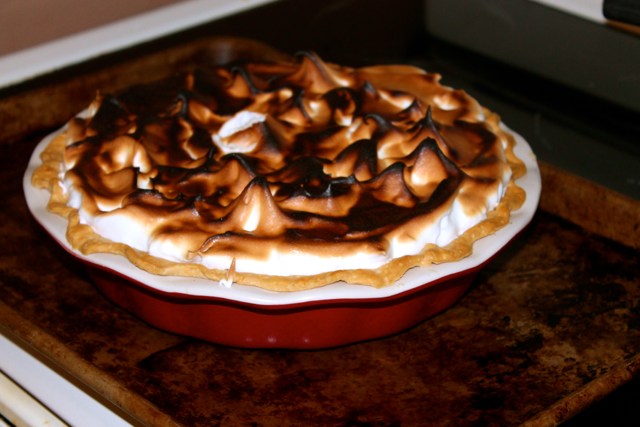 Pie #2 better but when we cut it, EGADS! It fell apart. 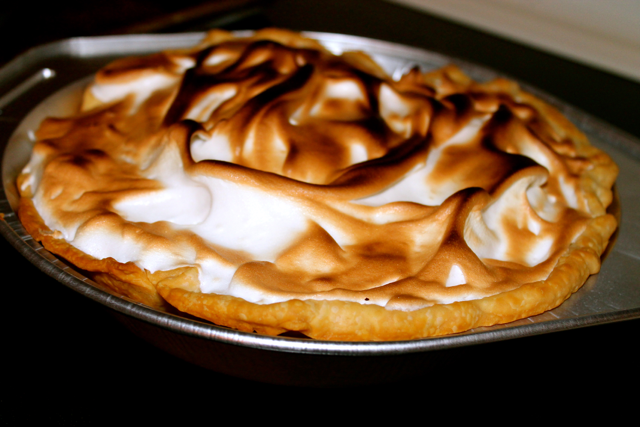 Pie # 3 Much better but it fell apart too. 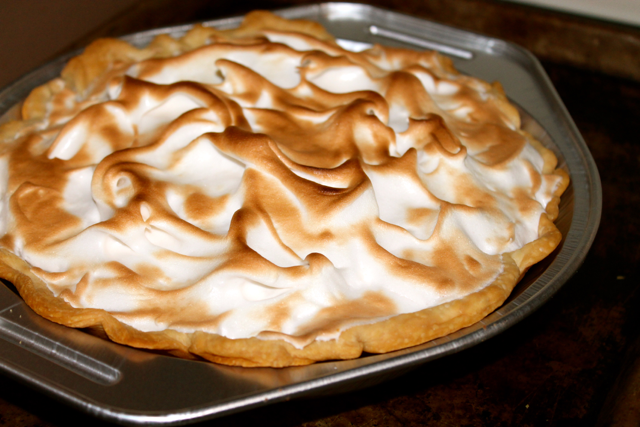 Pie # 4 the finished result for today’s recipe. This one held up and the meringue was perfect. I gave up that Swiss meringue instructions, added those little tweaks and baked the whole pie. So, this worked out much better for me.

Ya gotta love that! And friends, I am super grateful that I can share my little secrets for a fail-proof recipe. I really do love what I do and sharing it with you!

If you have some tips you’d like to share on making a from-scratch lemon meringue pie, I’d love to hear from you. You know where to find me.

I do hope you folks will give this one a try. It’s fantastic! I mean, pie? Yeah! And the scientific magic of eggs, to boot just makes it that much more fun. Have a fabulous day and as always, keep it delicious!