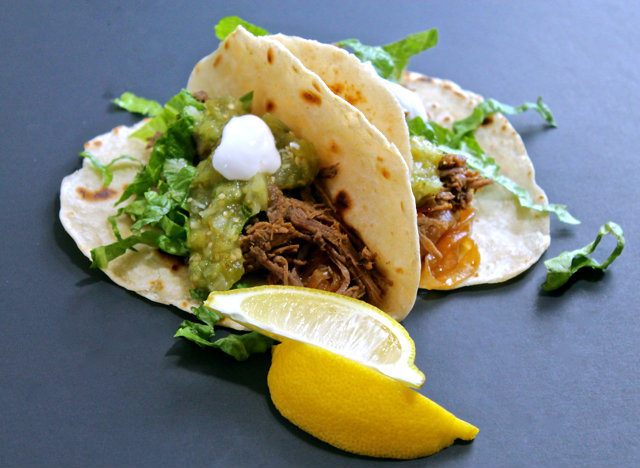 It never ceases to amaze me when I get my hands on a recipe that totally knocks my socks off but when it impresses my crew to the point where they’re practically licking the scrapings out of the pan, I know I’ve got something I’ll make again and again. This dish is one of those. I was totally surprised at how good these turned out. They really are the best beef tacos ever!

To make them for yourself, you’ll need two pounds of chuck roast, trimmed of excess fat and cut into 1 1/2 to 2 inch chunks. You’ll want the meat to be nice and cold when you’re trimming and cutting. 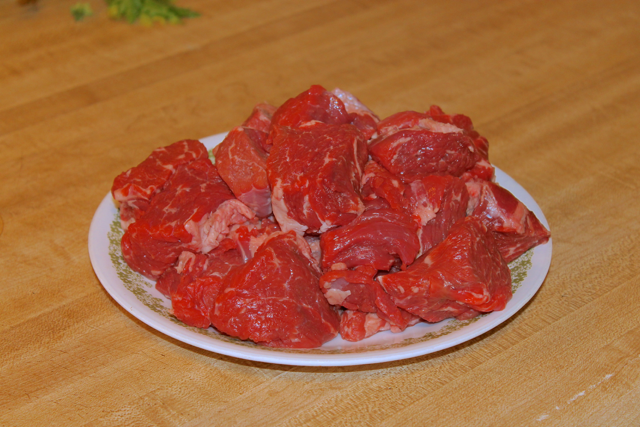 This technique for cooking the beef is one of those low and slow deals.

To get started, you’ll place the beef chunks in a large skillet 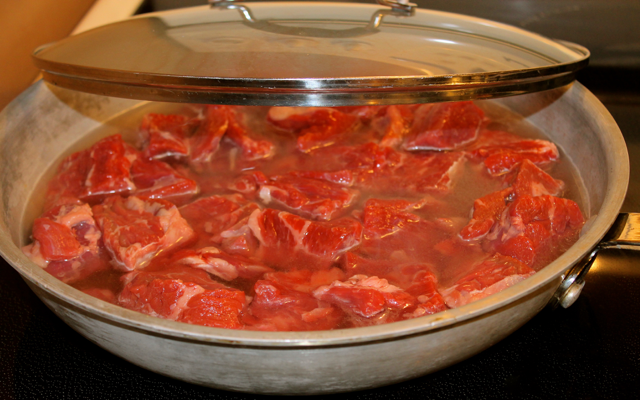 It’ll look pretty funky at this point but trust me, it’s super delish by the time you finish. 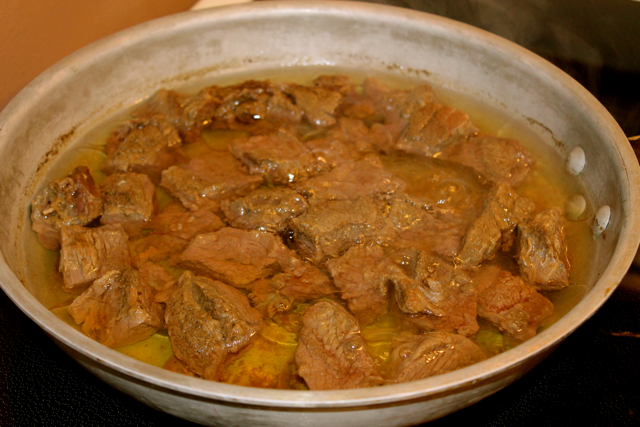 After you remove the lid, turn the heat up to high and get it boiling again. After about 20 to 30 minutes, the liquid in the pan will render down. That rendering will leave you with the fat from the beef. That’s the super good stuff!

Keep an eye on the liquid level as it’s boiling so you don’t boil out too much like I nearly did! You want to leave 3 to 4 tablespoons worth of liquid in the pan.

Take the meat out of the pan and set it aside. Remove the fat and the brown bits from the pan and reserve. Don’t throw that out. It’s SUPER flavorful stuff! 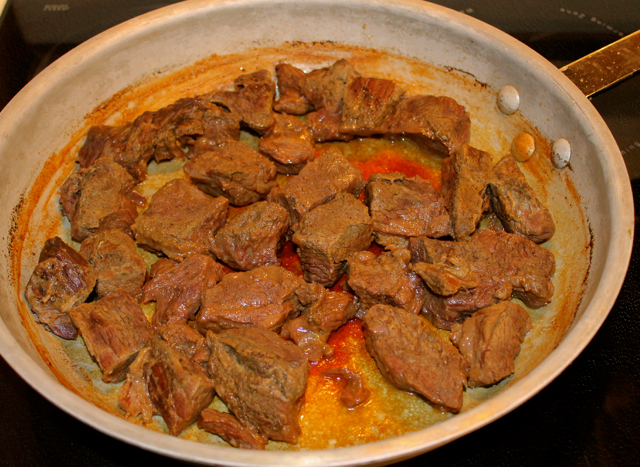 Place a tablespoon of the fat and browned bits in the pan and toss in a sliced onion. Cook on med/high heat until the onions begin caramelizing. Add a tablespoon of lemon juice and 1/4 cup of water to the pan to deglaze the bottom. Remove the onion and set aside in a covered dish to keep warm. 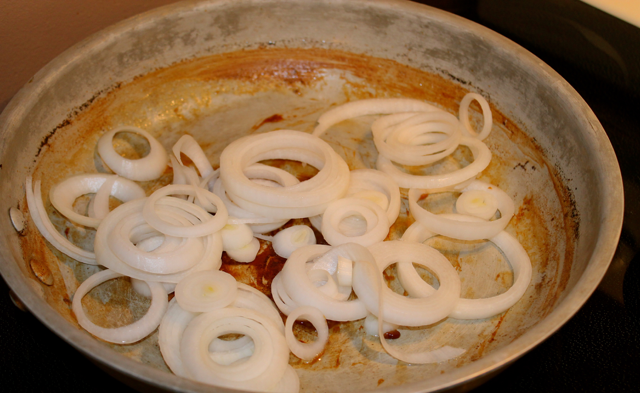 Place another tablespoon of the reserved fat and browned bits back in the pan along with the beef chunks. Add 1/4 cup of water to the pan and use a potato masher to break up the chunks of beef into shreds. 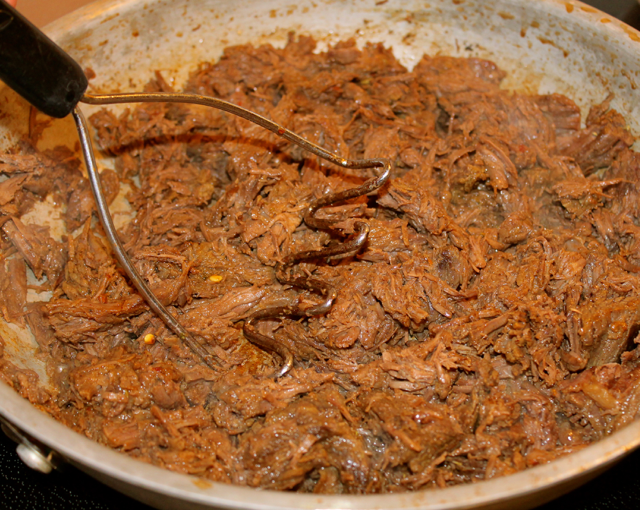 Turn the heat to low and add: 1/4 tsp chili powder, 1/2 tsp cumin, 1/4 tsp dried oregano, 1/2 tsp onion powder, 1/2 tsp garlic powder and 1/2 tsp hot chili paste. Incorporate the seasonings well with the potato masher and cover the pan with a lid. Allow the mixture to warm through and turn the heat off.  Keep covered until ready to serve.

The beef on it’s own is extremely tasty, so there’s not a ton of seasoning, just enough to enhance everything. By waiting until the end to incorporate, the flavor of the seasonings won’t get lost during cooking. 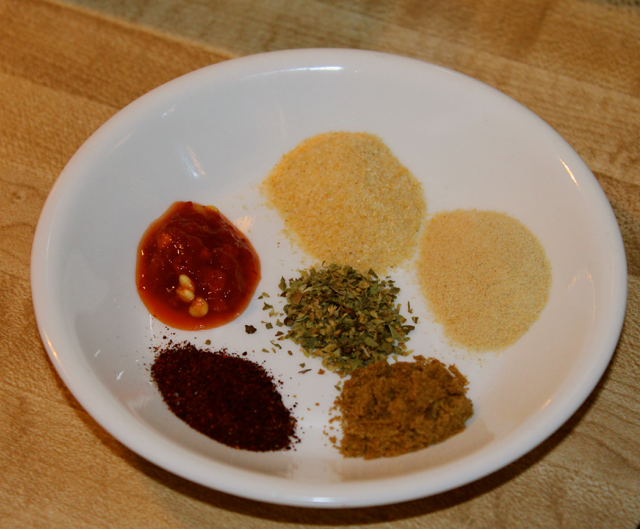 Serve on fresh, warmed tortilla shells with the caramelized onions and your favorite toppings.

Be sure to check out my recently posted homemade flour tortillas, roasted tomatillo salsa and homemade sour cream recipes. You can make the sour cream ahead and make the tortillas and salsa while you’re waiting on the beef to cook. Homemade is always better!

I plan on making these again very soon because they’re irresistibly scrumptious. The beef recipe can be adapted for the pressure cooker to speed it up or a slow cooker to set it and forget it. The only difference would be transferring it to the stove for the rendering down part. I love a recipe that can be adjusted to suit your timing needs.

I do hope you’ll give these a try and enjoy the best beef tacos ever. I’m pretty sure you’re gonna be smiling when you sit down for dinner. I was! 😉

Make it a fabulous day and as always, keep it delicious!

** Want to make these quicker? If you’ve got a pressure cooker, you can have this recipe done in about an hour. Check out this post —> Instant Pot Carnitas. The recipe works for beef or pork. Here’s a fancy schamancy how-to video… 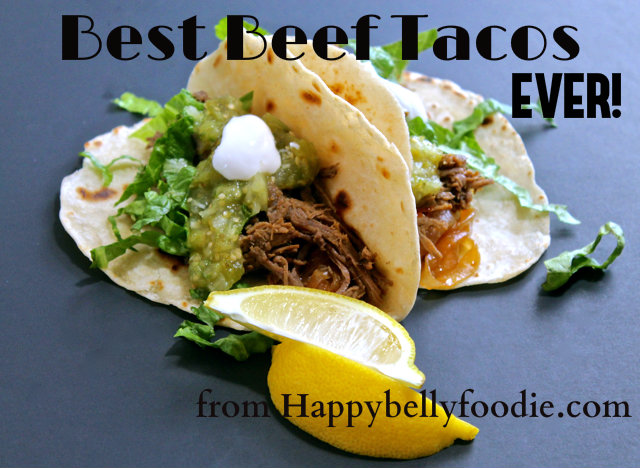